I came across a blog post I want to share with you. It was written by the University Chaplain at the University of Indianapolis and he discusses the R-word that has been thrown about a lot over the past week.

You can thank two guys for that trending topic: Nevada rancher Cliven Bundy and LA Clippers owner Donald Sterling. Some of the comments these gentlemen made were ridiculous and I could only marvel at the contradictions and misguided ‘truths’ they hold to. They gave me a good laugh.

While Mr. Bundy was railing against the government about paying overdue grazing fees on disputed land, he opined that African-Americans had better family lives during slavery and wondered if blacks were better off picking cotton. First, how that correlated with fees and land disputes is beyond me. Second, I assume he’s unaware it was common practice to rip apart slave families by selling family members and children to the highest bidder. Because I’m sure that does wonders for a family life. And who knows? Slavery might have been a day at the spa. The slaves probably had plantation stock options, paid vacation, and wellness rooms. Those old 1800’s pictures of barefoot slaves wearing tattered clothing and miserable expressions? They must’ve been photo-shopped to hide how wonderful life was—before that dang Abraham Lincoln messed everything up.

Mr. Bundy is probably glad that Donald Sterling opened his mouth to take the spotlight off him for a few minutes. In a recorded conversation, Mr. Sterling allegedly told his half-black, half-Mexican girlfriend that he didn’t want black folks attending his games. Perhaps he thinks they’ll talk too loud during the show and disturb the other twenty thousand people yelling and shouting obscenities like normal people do. Of course, he has no problem paying millions to black guys to play for him.

Look, the guy can do what he wants. It’s his team. He doesn’t need to worry about me buying a ticket. It just doesn’t make sense to me. I thought he was a shrewd businessman. Have you seen ticket prices for good seats at sporting events these days? They are astronomical. So black folks want to come in to make him richer—and he wants to turn them away? Especially if they’re coming to see the same black guys that he paid millions to play for him? If a Klansman decided to make Partners in Crime the Book of the Month for his Ku Klux Klan book club, I wouldn’t care. I’m not going Donald Sterling on anyone. Especially if they’re buying lots of books. I’m certainly not giving back the money. I’d probably use it to present a check to the UNCF on behalf of the Klan to see what happens (dang it, I bet I just lost that reader demographic). 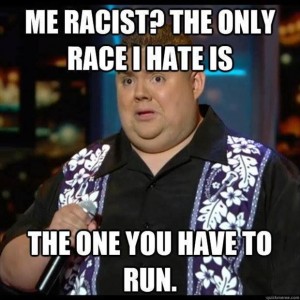 So are these guys really racist? I’ve read opinions and viewpoints that question whether the feelings of Mr. Bundy and Mr. Sterling are based in racism. As an African-American male, my view of what constitutes racism is different from those who never experience it. Over the years, I’ve come to believe that people who don’t experience racism simply have a hard time seeing it unless it’s something terribly obvious like a violent hate crime. Usually, it is more subtle than that.

Other viewpoints acknowledge that they are racist, but since they grew up in different times, we should expect it and give them a pass. However, there are plenty of people who grew up in the same era and don’t feel the same way. As human beings, we have the potential to grow and evolve. In 2014, it is almost impossible to not be exposed to a diverse array of people making positive contributions to society. Especially in Donald Sterling’s case. So if he still harbors those beliefs, it is because he chooses to, not because he grew up in a different time and is automatically set in his ways. However, there is one thing I can say about these two. They are open and honest in their views. I wish all people feeling that way would be as up front about it. The ones who keep it hidden are much harder to detect.

Anyway, take a look at this post from Rev. Jeremiah Gibbs. I think it gives great insight on the subject and how recent events with his adopted son caused him to think differently about it.